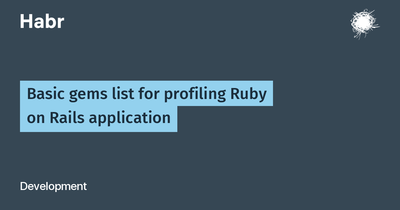 Even most of the experienced Ruby on Rails developers sometimes forgot about annoying mistakes they produce in the long development processes, like n 1 queries or lose a lot of time with some unexpected queries from nowhere.Not all these mistakes can be avoided before the production, but at least you can try :)Yes, that’s another list of forgotten or not so popular gems for the better development processes.Let’s begin.
Basic gems list for profiling Ruby on Rails application #ruby #rails #rubyonrails #bosnia #programming #tutorials #rubydeveloper #railsdeveloper

Setup Ruby on Rails 6 App with MongoDB under 5 Minutes