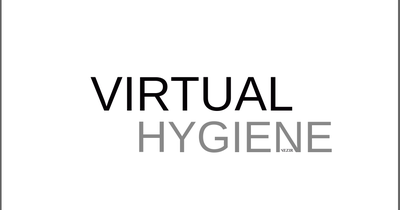 "VIRTUAL HYGIENE" - THE TERM I MADE

After, some thought I come to a term "Virtual Hygiene" which is a coin from two other terms.Virtual - in world of computers is often explained as 'not physically existing as such but made by software to appear to do so'. It is computer-based simulated environment which may be populated by many users who represent them self in a way of a personal avatar.Hygiene - was the Greek goddess of health, cleanliness and sanitation. In general definition it is a 'practice or activity that you do to keep things healthy and clean.'.So, in general my suggestion for term 'Virtual Hygiene' definition would be:Virtual Hygiene - is practice or activity which has a goal to protect our general health and presence in the virtual (computer) generated world.
"VIRTUAL HYGIENE" - THE TERM I MADE #ruby #rails #rubyonrails #bosnia #programming #tutorials #rubydeveloper #railsdeveloper

Allow you to pluck attributes from nested associations without loading a bunch of records.