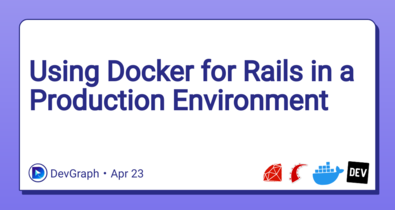 Using Docker for Rails in a Production Environment

Running a Rails application in production requires installing Ruby and other packages. It's not difficult and configuration management system like Chef or Ansible makes it even easier. Here we're going to look at a different approach. By using Docker, installing Ruby and other packages happens on the build phase. In your production servers, you'll run your Rails application like any other Docker containers.If you want to follow along, you need to have Docker installed on your local machine. I use docker-machine but there are other ways of getting Docker.Before you run your Rails application in a container, you need to build a Docker image. This is done using a Dockerfile.
Using Docker for Rails in a Production Environment #ruby #rails #rubyonrails #bosnia #programming #tutorials #rubydeveloper #railsdeveloper

Automatically save screen shots when a Capybara scenario fails