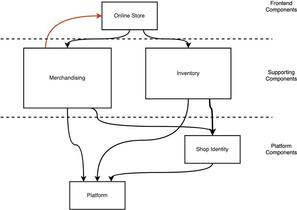 Under Deconstruction: The State of Shopify’s Monolith

Ruby on Rails is a great framework for rapidly building beautiful web applications that users and developers love. But if an application is successful, there’s usually continued investment, resulting in additional features and increased overall system complexity.Shopify’s core monolith has over 2.8 million lines of Ruby code and 500,000 commits. Rails doesn’t provide patterns or tooling for managing the inherent complexity and adding features in a structured, well-bounded way.That’s why, over three years ago, Shopify founded a team to investigate how to make our Rails monoliths more modular. The goal was to help us scale towards ever increasing system capabilities and complexity by creating smaller, independent units of code we called components. The vision went like this:.
Under Deconstruction: The State of Shopify’s Monolith #ruby #rails #rubyonrails #bosnia #programming #tutorials #rubydeveloper #railsdeveloper

RailsInstaller for Ruby On Rails on Windows