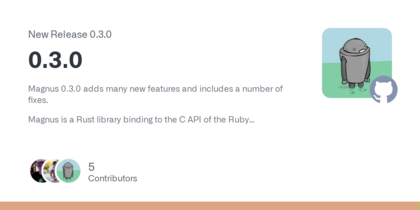 Magnus 0.3.0 adds many new features and includes a number of fixes.Magnus is a Rust library binding to the C API of the Ruby programming language. Magnus lets you write Ruby extension libraries (or 'gems') in Rust, or embed Ruby in your Rust program.A large portion of Ruby encoding API has been added, this includes creating Ruby strings in any encoding, converting between encodings, iterating a Ruby string's codepoints, testing a character's type, and an optimisation to RString::as_str that can avoid utf8 validity checks when that information is already known by Ruby.Conversions between Ruby's integer and float format and the native types used by Rust has seen dramatic performance improvements, and is now on-par with C performance.
Release 0.3.0 · matsadler/magnus #ruby #rails #rubyonrails #bosnia #programming #tutorials #rubydeveloper #railsdeveloper

CLI to Generate and Run a Rails environment with Docker