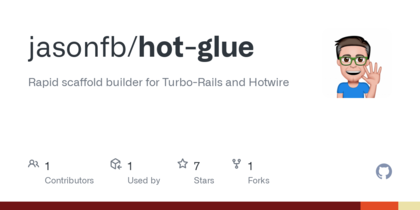 Hot Glue is a Rails scaffold builder for the Turbo era. It is an evolution of the admin-interface style scaffolding systems of the 2010s (activeadmin, rails_admin, and active_scaffold).Using Turbo-Rails and Hotwire you get a lightning-fast out-of-the-box CRUD building experience. Every page displays only a list view: new and edit operations happen as 'edit-in-place', so the user never leaves the page.It will read your relationships and field types to generate your code for you, leaving you with a 'sourdough starter' to work from. If you modify the generated code, you're on your own if you want to preserve your changes and also re-generate scaffold after adding fields.By default, it generates code that gives users full control over objects they 'own' and by default it spits out functionality giving access to all fields.Hot Glue generates functionality that's quick and dirty. It let's you be crafty. As with a real hot glue gun, use with caution.
Rapid scaffold builder for Turbo-Rails and Hotwire #ruby #rails #rubyonrails #bosnia #programming #tutorials #rubydeveloper #railsdeveloper

Take a peek into your Rails applications.