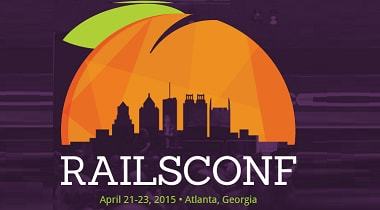 Rails Conf 2015
Day 1: DHH keynote, Sara Chipps keynote
David Heinemeier Hansson kicked off the conference by announcing a few new features in Rails 5: Rails API, turbolinks 3, a native mobile wrapper and web sockets support (a.k.a. Action Cable).
The amazing Sara Chipps wrapped up the day by sharing her experienceteaching kids to code.
Check the schedule for a full list of talks from Room 202. Shameless plug:yours truly gave a talk following the DHH keynote ;)
Day 2: Aaron Patterson keynote, lightning talks
Aaron Patterson started the second day with a punishing amount of word play jokes. In between trolling other keynote speakers and rebooting his computer, he also dropped an incredible amount of performance knowledge.
Don’t forget to catch the lightning talks towards the end of the stream!
Day 3: Ruby heroes, core team panel, Kent Beck closing keynote
The Ruby heroes awards were given on the third day, followed by a panel discussion featuring some members from the Rails core team.
Kent Beck, aka the creator of XP (not to be confused with the other XP) wrapped up the conference with a focus on the human elements of programming.

A Ruby Cheatsheet For Arrays - ITNEXT