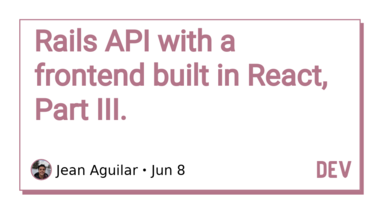 Rails API with a frontend built in React, Part I.

When I was learning react I was kind of disappointed because I could not get a good tutorial on how to integrate rails with react. The only ones I found were using everything inside of rails(building a regular based rails app with webpacker and react-rails). While this approach is cool and fast to set up, it does not work as a regular API, it is just a regular monolithic app(everything is contained in the app, the backend and the frontend). At the end with lot of research I managed to learn how to integrate those tools, it was not as hard as I thought and because it is an API it should be the same if we use another framework or tool that sends and receives JSONs.
Rails API with a frontend built in React, Part I. #ruby #rubydeveloper #rubyonrails #api #frontend #react,