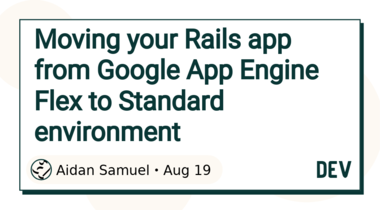 tl;dr Default GAE config for Standard Environment prevents Rails apps from running. It's because skip_files is preventing a key file from being uploaded.

Google App Engine currently has two environments: Standard and Flex. Without going into too much detail, the Flex environment is more flexible and can run anything that runs in a docker container. The Standard environment is more restrictive (restricting you to specific languages), but it has other benefits such as much faster deploy times (~4mins instead of ~15mins), faster scaling, and it can even scale to zero.

Until recently, the standard environment hasn't been available to Rubyists, but in June 2019, Google announced that a Ruby 2.5 runtime is available.