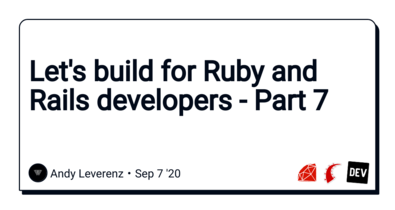 I'm excited to announce the new launch of a series where I focus on building a community and job marketplace for Ruby and Rails developers.After some awesome feedback about a recent poll I created on my YouTube channel I decided to commit to building a new community while recording the entire process. Over 100 of my channel's subscribers responded in favor which is truly amazing to see. Thank you if you participated!To be considered a successful build I want to:Create something useful for the Ruby and Rails community.Show the process of creating a real-world application as best as I can.Launch the final application and hopefully see some traction (with your help of course!).
Let's Build for Ruby and Rails developers #ruby #rails #rubyonrails #bosnia #programming #tutorials #rubydeveloper #railsdeveloper

How To Refactor Big Rails Projects