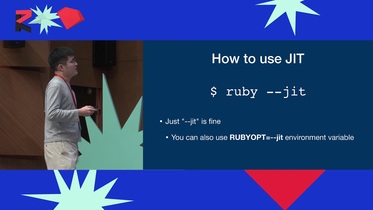 Have you ever tried the JIT compiler introduced in Ruby 2.6? Just passing --jit may significantly improve your application's performance.However, Ruby 2.6 JIT has struggled to optimize applications having a lot of hot methods. As we also want to optimize such applications, we've worked hard to approach the problem in Ruby 2.7.In this talk, you'll briefly learn how to use the JIT compiler, and know its performance improvement on real-world applications with Ruby 2.7.
JIT compiler improvements in Ruby 2.7. Takashi Kokubun - YouTube #ruby #rails #rubyonrails #bosnia #programming #tutorials #rubydeveloper #railsdeveloper

Seven reasons why a Rails 5, Redux, React, and React Native stack is fantastic for new startups