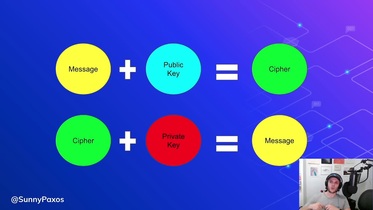 You may not know it, but you use prime numbers every day. They play a major role in internet security in the form of encryption.In this talk, you will learn the inner workings of how the internet uses prime numbers to keep your data private as it travels over the wire. We will cover topics such as symmetric and asymmetric encryption, and why prime numbers are just so damn hard to crack. By the end, you will understand how to encrypt and decrypt data yourself with just the Ruby standard library.So come join me as we demystify HTTPS using code, color theory, and only a pinch of math 🤓.Sun-Li BeatteaySunny is a software engineer and Rubyist at DigitalOcean where he works on building managed storage products. He has been using Ruby since he started learning to program in 2016. Like Ruby, he's passionate about encapsulating complicated concepts in simple language. When he's not breaking production, he can be found trying to figure out how to pipe all his troubles into /dev/null.
How Prime Numbers Keep the Internet Secure - Sun-Li Beatteay - YouTube #ruby #rails #rubyonrails #bosnia #programming #tutorials #rubydeveloper #railsdeveloper

Integration Testing Ruby on Rails with Minitest and Capybara - Semaphore