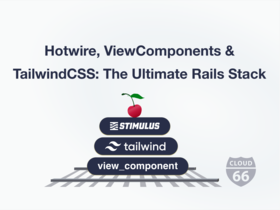 TailwindCSS bills itself as a "Utility First CSS framework". I'm not quite sure what that means, but I really like what it actually is. In a nutshell, Tailwind lets you build nicely styled HTML documents without messing with CSS directly. When you look at Tailwind the first time, it feels like bringing back inline style into your HTML and you'll get a bit of a sick feeling as a result. But once you try it you will realize it is far from that and is actually very good. By moving style in a nicely packaged way into HTML you are avoiding a lot of styling issues that come from the use of central CSS documents. No more !important, no more dilemmas about style groups or dependencies. Things make sense in a single document (the markup) as you read them. Not only Tailwind is much easier to use than building your own entire CSS stack, but it is way easier to understand and work with than frameworks like Bootstrap.
Hotwire, ViewComponents and TailwindCSS: The Ultimate Rails Stack #ruby #rails #rubyonrails #bosnia #programming #tutorials #rubydeveloper #railsdeveloper