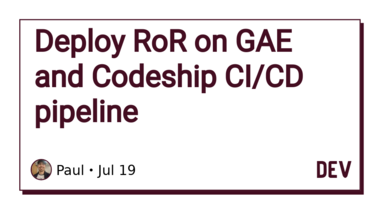 I have the time to gain knowledge in deploying a Ruby on Rails app to Google Cloud Platform. Creating a CI/CD pipeline with CloudBees Codeship to Google App Engine (GAE). GAE is a very simplistic way of deploying services that. More information on GAE can be found here. GAE DocsGAE is very easy to do a blue/green canary upgrade and many other features. There's quite a bit of working gears per say in this deployment but once done, any changes to the code will be simplistically. Only down side I have to this is that the cloudbuild takes forever to build and if you had to change one line of code, you'll be waiting for at least two hours.
Deploy RoR on GAE and Codeship CI/CD pipeline #ruby #rails #rubyonrails #bosnia #programming #tutorials #rubydeveloper #railsdeveloper

Spreadsheet Architect is a library that allows you to create XLSX, ODS, or CSV spreadsheets super easily from ActiveRecord relations, plain Ruby objects, or tabular data