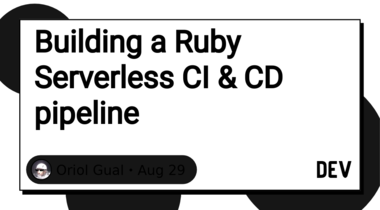 When facing a serverless project, the last thing we probably want to worry about as developers is infrastructure or deployment. We just want to make sure that as soon as we are certain our app is working OK, it is deployed as easily as possible. This could also be applied to any kind of project of course, but I think it fits specially well in a serverless one.In this example, we're going to use the Serverless framework, which already does a lot of the work, but I still found myself repeating the same tasks and code between different projects each time I had to create the continuous integration .
Building a Ruby Serverless CI #ruby #rails #rubyonrails #bosnia #programming #tutorials #rubydeveloper #railsdeveloper