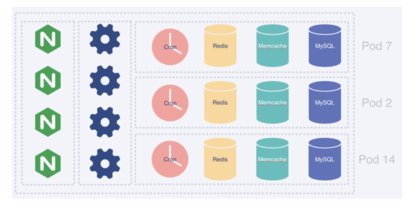 A Pods Architecture To Allow Shopify To Scale

In 2015, it was no longer possible to continue buying a larger database server for Shopify. We finally had no choice but to shard the database, which allowed us to horizontally scale our databases and continue our growth. However, what we gained in performance and scalability we lost in resilience.If any of our shards went down, that entire action would be unavailable across the platform. We realized this would become a major problem as the number of shards continued to increase. In 2016 we sat down to reorganize Shopify’s runtime architecture.Simply sharding the databases wasn't enough, we needed to fully isolate each shard so a failure couldn't spiral out into a platform outage. We introduced pods (not to be confused with Kubernetes pods) to solve this problem. A pod consists of a set of shops that live on a fully isolated set of datastores.Outside of the isolated datastores, pods also have shared resources such as job workers, app servers, and load balancers. However, all shared resources can only ever communicate to a single pod at a time—we don’t allow any actions to reach across pods.Using pods buys us horizontal scalability, we can consider each pod in total independence, and since there no cross-pod communication, adding a new pod won’t cause unexpected interference with other, pre-existing pods.
A Pods Architecture To Allow Shopify To Scale #ruby #rails #rubyonrails #bosnia #programming #tutorials #rubydeveloper #railsdeveloper